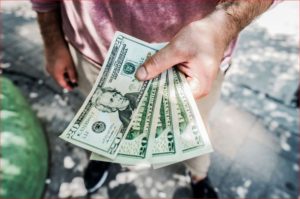 Why would you give more of your money to a government which purposely inflates its salary budget in the millions of dollars to mislead  you into thinking more revenues are needed? Answer – you wouldn’t (if you knew the truth).

As Warren Buffet famously said, “only when the tide goes out do you discover who has been swimming naked”. Last night at the Town Council meeting, the tide went out and it wasn’t a pretty sight.

We finally learned, what many of us already suspected;  that the 1.2% increase in compensation claimed by Mayor Rennie and Council Members Leonardis and Jensen in the Measure G ballot argument was nothing more than a pure falsehood. Watch the video if you don’t believe me. We heard ridiculous excuses like “we didn’t know”, “we wouldn’t purposely mislead you”, and so on and so on.

By the way, this gang of three has purposely mislead us. Just read their ballot argument where they state “all funds generated by this Measure would be dedicated exclusively for use by the Town to maintain essential services” and then read the Town Attorney’s impartial analysis. You decide for yourself who is misleading whom.

Bottom line is the 1.2% number is false and Mayor Rennie and Council Members Leonardis and Jensen either knew or should have known this was a false statement. While we never learned the real number, Town Manager Laurel Prevetti did admit under lots of pressure that Staff salaries were going up about 7%.

We still don’t believe that number is entirely correct since that the police department salaries are going up closer to 8%, and they represent 40 % of the staff.  But I guess that’s good enough for this crew.

We also learned that Prevetti purposely inflates the budget for salaries and benefits by calculating individual salaries for all 149 full time employees at the highest pay step possible, regardless of where they actual are paid. This practice, which is not (Government Financial Officers Association (GFOA) best practices, intentional inflates the budget for salary and benefits by millions of dollars! You read that correctly —— millions of dollars.

You can confirm this by looking at C-15 of the Financial Summaries schedule for the FY 2019 Budget. There you will see that the adopted budget for salary and benefits for 2018 was $27.0m and the actual was $24.7m. You got it —- $2.3m less than the adopted budget! And the funded headcount was equal to the actual headcount! I think you get the picture.

Last night as the tide rolled out, the Town Council approved a budget for salary and benefits based on this insane methodology which is 18% higher than the actual level last year! That is correct – 18% which is $4.1m. But we are not done yet.

Not one Council member seemed bothered by this. No one stopped and asked the obvious 5th grade question “if we are approving “only” $1.5m in salary and benefit increases, and we are approving a salary budget which is $4.1m greater than prior years actual expenditures, what accounts for the $2.6m difference between the $4.1m increase and the $1.5m? What is this $2.5m going towards”?

Unfortunately it was a “no one home – total lights out” moment.

Well, Ms. Prevetti had actually given us the answer, if you listened carefully. That $2.6m difference is fluff – cushion – or more appropriately called sand bagging! The same thing they did in 2018, but even more!

It is the way the Staff creates the appearance that the Town desperately needs more money so they can justify things like increasing the sales tax!

Unfortunately it isn’t transparent, it isn’t honest and it isn’t a good budgeting practice! You won’t find the GFOA (Goevnment Finance Officers Association) advocatingintentionally overstating the Town’s budget for salary and benefits. In fact the GFOA has a best practice advisory out on this very point, entitled “Effective budgeting of Salary and Wages”. Prevetti should read it and so should the Town Council. This is just common sense.

Here is the very first sentence from the advisory – “Given the funding constraints governments are facing, accurate expenditure projections are more important than ever”. Pretty sound advice which this Town should adopt.

Where does this lead me – VOTE NO on this unneeded Measure G sales tax!

The Town has $76m in cash, $16m of which was added over the past 4 years AND has a 2019  budget that has purposely padded the salary and benefit expenditures by approximately $2,600,000 ! Why do we need to tax ourselves given all of this?

They don’t need any more of our money. It is so very clear. Mayor Rennie and Council Members Leonardis and Jensen have been intentionally misleading us. Time for the voters to reject Measure G and reject this type of leadership.

Measure G has been proposed by politicians Rob Rennie, Marcia Jensen and Steve Leonardis hinting that the future is bleak – yet not telling you that the town’s own budget for at least the next 5 years has … Continued

October 24, 2018 Dear Mayor Rennie, Thank you for your reply to my email. I was surprised to learn you have been aware for years of the purposeful overstatement of salary and benefits expenditures by millions of dollars in the … Continued

To The Voters And Merchants of Los Gatos: Why you should vote NO! on Measure G – the sales tax measure put forth by the Town Council for the November 6th, 2018 election.  The numbers you see below come from … Continued

I have sent the following letter to the Town Council as well as the staff as a follow up to a totally misleading Next Door Post that they posted, and closed off comments to, today.  Why do you think they … Continued

Argument Against Measure G.   There are no compelling reasons to increase the sales tax in Los Gatos.  Council Member Barbara Spector called the ballot measure misleading to our community.  Now it is up to the citizens of Los … Continued