It is with this overarching goal of seeking balance between our history and our future, in a Town that is almost fully developed, that we offer the following specific comments about the 2040 General Plan.

The 2040 General Plan currently reflects 3,263 new units (excluding hillside development) being added over the next 20 years. This is not supported by any population forecast prepared by DOF or ABAG.

(ABAG has projected a moderate population growth over the next 20 years to 33,050.  Depending on where you’re reading in the GP, the Town has forecast growth to 42,021.  In the last 20 years, Los Gatos grew organically by 1.7%.  The Town is projecting approximately a 35% increase and a 27% increase over the projections of ABAG.

The draft 2040 General Plan’s inclusion of this excessive proposed growth in housing has driven material, Town-wide changes in land use designations, zoning densities and lot coverage ratios that are not necessary and would not be required if planned growth was more reasonable and more targeted to produce affordable housing in particular locations that the Town can make attractive to development.

The Town has changed our development to be Town-wide rather than concentrating density in the “opportunity zones”.  This is contrary to all that I have read about making mass transportation and affordable housing viable and effective in cutting down GHG and VMT.  Concentrating growth in “opportunity zones” will provide housing to lower level management; school teachers; policemen as well as some service workers.  Much of what is built; how it’s built and who moves in will depend on things like incentives; tax breaks; subsidies; tax increases(?!!); building heights, etc.

Our proposal calls for the development of 1,437 below market rate (BMR) housing units. This is 23% more than the 6th cycle RHNA allocation for BMR, with total housing exceeding the total RHNA allocation by a 20% buffer. By comparison the current draft 2040 General Plan does not commit to any level of BMR housing even though the total units being planned are 64% more than the total 6th cycle RHNA allocation. The Town’s historical performance in meeting the BMR RHNA allocation is very poor. For the 5th cycle, the Town so far (there are 2 years left) has achieved only 30% of the BMR target while achieving 84% of the above moderate income housing target. This substantiates the point that, faced with very high land costs and high material and labor costs to build, developers will build housing targeted to higher income levels. Please see the attached “Analysis Housing Units by Income Category” for our plan of housing units by income category. Affordability requirements and proper development incentives (such as inclusionary zoning and density bonuses) can deliver affordable, income restricted housing.

We believe strongly that new housing should be built where it will best support economic, social, and environmental priorities. The 2040 General Plan abandons the Town Council’s previously adopted Preferred Land Use Alternative. Fundamental to this change was a significant increase in market rate housing over what was required by RHNA resulting in a shift of development from opportunity zones to a Town-wide redevelopment strategy. The DEIR showed that this change in redevelopment strategy, coupled with the lack of new employment opportunities, increased VMT and GHG to unacceptable levels that cannot be mitigated. A focused development strategy around accessible opportunity areas will give the Town the best opportunity to meet the affordable housing goals and will also enable the Town to meet the State’s goals in reducing VMT and GHG over the next 20 years. A simple rule of thumb is to concentrate affordable housing in high opportunity areas where increased densities would be allowed and make sense. 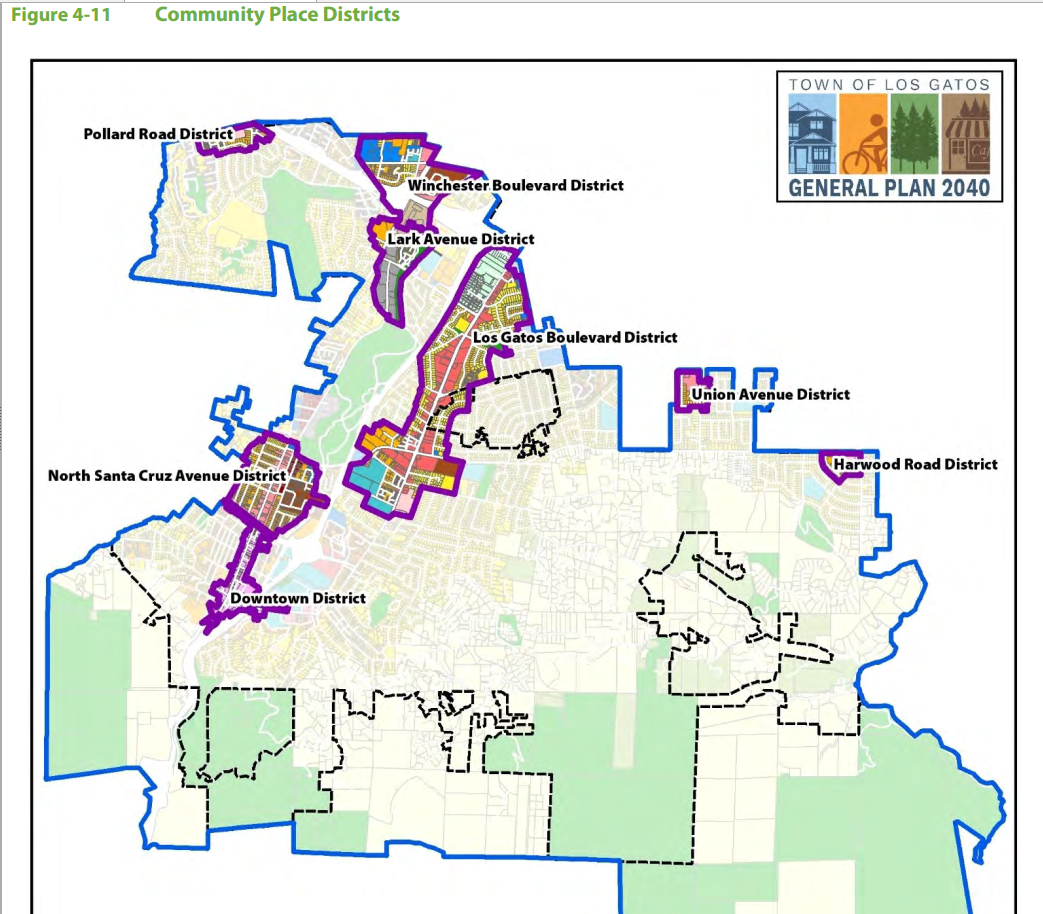 4. The Housing Element must be prepared simultaneously with both the Land Use Element, and Community Design Element to ensure internal consistency of all the elements and provide residents with a complete understanding of the 2040 General Plan.

Given that the 2040 General Plan defines the policy framework by which the Town’s physical and economic resources are to be managed and used for the next 20 years, the General Plan must be complete with all elements updated to ensure internal consistency. Only then should the 2040 General Plan be adopted. It is simply too important a document to be developed piecemeal. Only the Housing Element needs to be approved by the State, and this is not due until 2023. There is sufficient time to prepare a complete, well-integrated 2040 General Plan.

New development brings increased demands on local government services and infrastructure, but also generates new revenues for local government through additional taxes and fees. A fiscal impact analysis of these increased expenditures and revenues would help to evaluate whether the proposed development would generate sufficient new fiscal revenues to cover the fiscal costs associated with provision of public services over the 20-year planning horizon. This is also consistent with the General Plan’s guiding principles of fiscal stability/responsibility. Without completing a FIA, it cannot be known if the 2040 General Plan is fiscally stable. The 2040 General Plan should not be adopted until the full economic impacts of it are known and publicly disclosed.

A FIR is a planning and management tool.  Planning in that you have to think of what your goals and targets are.  You have to plan on how to get from where you are to where you need to be with the resources you expect over the “x” years.  To Plan for an unknown future, you must make assumptions, and assumptions require not only the thought process as to what might happen, but what alternatives you may have to plan on in case things go sideways.  It creates an “if this, then that” mentality within the organization that even employees can leard to appreciate.  You plan on various solutions to various problems before you need to use them and that makes your town ready for as many scenarios as you feel necessary to have alternatives in place.

The first year is usually the most difficult, but you continually monitor, measure and report.  Each year you become better and this gives the Council confidence that the staff has the town’s financial interests well in hand.  The Council is able to make better decisions as they understand the nuances of finance.  Financial Impact Reports give the citizens more confidence that their staff is on top of their game.

Affordable Housing’s Success has a direct correlation to Transportation Options 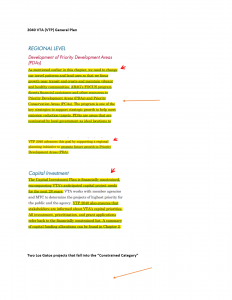 Two Los Gatos projects that fall into the “Constrained Category” 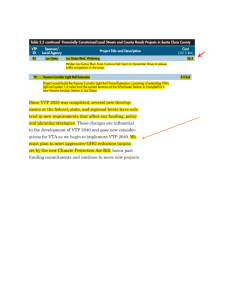 Our GHG ratio actually exceeds the threshold in 2030, and increases again in 2040.  VMT also increases in both decades.  This absolutely is in opposition to reducing the effects of climate change.

Our 2040 General Plan needs to reverse these two negative indicators and do our part to reduce the effects of Climate Change. 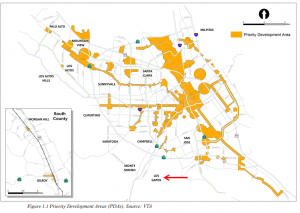 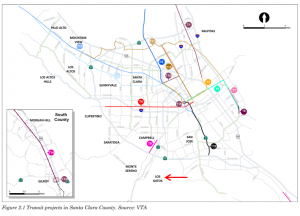 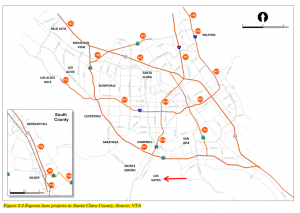 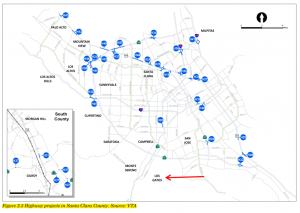 The pictures above are to show you that the VTA has no plans for Los Gatos in the next 20 years.  In fact, they are “financially constrained” over the next 28 years.  Whatever we do in the way of creating Affordable housing has to be planned for a long period of no assistance from the VTA – but plan for Affordable housing is something we must do for the bay area and for Los Gatos.  It’s part of our balanced plan and our contribution to the shortage of housing.

The General Plan 2040 has to be more flexible to cope with the changing dynamics that we are causing.   Collectively we are changing the way we work (think, Zoom); we are changing the way that we move around (think electric cars, Uber, staying home more);  our population is currently is declining  for the first time ever (cost of living; smoke and fire; water shortages; too crowded).  We think that we should create a complete General Plan now and review progress every 5-10 years.  Metrics should be established after we have developed a Financial Impact Report. Those should be measured every year. Remember that the GP can be amended by the Council to “adjust” to the fast moving changes of our circumstances.

Once again, we think the plan should be complete and not created piecemeal.  Construct the Housing Element now and toss out the old.  The 2040 General Plan needs to be a new way of doing business going forward.  Los Gatos needs to become a leader in this field.

This Silicon Valley town is doubling its housing; residents are crying foul

“Cities have the capability of providing something for everybody, only because and only when, they are created by everybody” – Jane Jacobs   The General Plan is more than a legal underpinning for land use decisions; it reflects the community’s … Continued

Sorry, but you do not have permission to view this content.